What makes me happy?

Food that’s just no good for me anymore. (just about everything these days)

Playing boardgames or card games and even some video games (Atari anyone?)

… Sharing this article I wrote for the Canadian Lutheran with all of you!

I hope it makes you happy too! 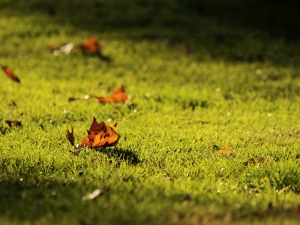 Not so very long ago I was walking with a friend who happened to notice that leaves were beginning to fall around his neighbourhood.

“Tell me it’s not Fall already!” he bemoaned “I’m just getting used to summer!”

“Well it IS late August,” I said, very sagely. “You knew it was coming.”  Lucky for me, friends don’t mind it when you are a bit of a jerk now and then.  They let the comments slide. Not even a few prematurely falling leaves were going to ruin our weekend.

But sometimes words (and their underlying attitudes) have a way of coming back to give you a glimpse of what you deserve.  Fast forward only a couple of weeks from my sage advice on the preparedness of one’s self for the signs of the changing seasons …  to the day when I woke up to the sound of geese flying south for the winter, my son getting ready for his first day of school, and the radio saying that it would be a cool morning so break out your jackets! “What happened!” I thought to myself. “When did fall get here!”

“Well it IS September,” I could hear Jim stating matter-of-factly in the back of my mind. “YOU knew it was coming hot-shot!” And what could I say back to my friend’s imaginary barb?  Nothing. He was right.  Even though I knew the signs, even though I had chastised him for the very same thing only days earlier, here I was in the same spot. Knowing the signs and being ready for the signs are not always the same thing.  Because when the signs do come, they appear quickly.

It is something we have been discussing as a family lately.  We have been reading C.S. Lewis’ “The Silver Chair.” together for our bed-time story. In it the children are given four signs to complete their task and they miss or goof up on every single one of them.  Just like in real life!  Knowing the signs, and being ready for them when they come are not the same thing!

It is also like another journey I have found myself on lately.  The inglorious road of getting older, developing health issues, and being poked and prodded and tested for and by nearly everything.  We all know the signs of getting older, but not one of us is ever really ready for it when it happens … because it all happens so suddenly.  (“Well, you are 41 years old,” I can hear my wife and/or my doctor sagely saying. “You knew it was coming sooner or later didn’t you.” )

So how will it be, as we turn our attention once again to the coming of the end (not just of me, but of all things), as our thoughts normally do around this time each year? As the lectionary draws toward the end of the year the signs of Christ’s second coming will begin to appear more regularly and quickly in the coming weeks. They are signs that we all know so well, we hear them every fall, we flavour our Advent with them every winter.  But knowing is not the same as being ready for them when they do appear.

Don't Take My Word for It

A Little Bit About Me …