“Behold, the virgin shall conceive and bear a son, and they shall call his name Immanuel” (which means, God with us).  [Matthew 1:23]

Welcome to the great season of NOT CHRISTMAS!

Advent is that pregnant pause in the Christian’s road to holiday cheer. That makes it so very frustrating for many people … the world is already celebrating Christmas, why can’t we?

We can! We do! But not until the time has come. Don’t deliver the baby prematurely.

Advent is much like pregnancy. Pregnant parents really and truly are parents, but their parenting consists in mainly getting ready.  Remembering the family’s past, looking forward to the family’s future and making plans for the arrival. It is a reality that doesn’t always seem so real. In that way it too is a little frustrating. Why won’t the baby just come so they can all celebrate together? But before that little one (who is already there) comes in that new and exciting way, there are many questions to be asked and answered. How will this baby change their lives? Their home? Their hearts? These are not little questions. There is a reason why God gives new parents nine months to get used to the idea!

Advent is a reality that doesn’t always feel so real. In Advent we remember the Christ who came into our flesh, the Christ who comes even now in Word and Sacraments and the Christ who will come again in glory on the last day. It is a season full of preparation and planning. It is a time of “Yes” and “Not Yet.” and “Why won’t the baby hurry up and arrive so we can all celebrate together?” And that makes it a season that is all the more necessary for everyone.

Who is this child whose arrival we will celebrate? How does He change our lives? How will He? How can we share our home with Him? What adjustments do we need to make? What does it really mean that God is with us in Jesus Christ, this babe of Bethlehem? These are not little questions. But they are vital to understanding and celebrating this Christmas Child who is coming again.

It is not Christmas. Not yet. But the One to come is already here. Are you making the most of the time you have with Him now? As He is here for us now? But He is still coming. When He arrives will you be ready? Let the expectant joy of that saviour’s return grow and swell in your heart until His time is ready. There is so much wonder and miracle to see in the waiting and the preparing … don’t miss out on this pregnant pause in your rush to hold the baby. There will be plenty of time for that … just not yet.

Full disclosure: I’m a man and I wear shirts.

I know this will automatically disqualify me, in the minds of some, from having an opinion or the right to share it. So be it.

By now you may have heard that there is yet another round of internet outrage this time over feminist reaction to a shirt. It seems some poor scientist made history this past week by wearing the wrong kind of clothing in a TV interview. Why he was being interviewed still remains a mystery to the outraged masses. But then, that hardly matters, as it is not about what you do, but what you wear for which one should be judged.

That is the feminist mantra isn’t it? Judge a person for what they wear. Shame them for their choice of wardrobe. Of course not. Blogger Bhagwad Jal Park summarized it rather nicely when he wrote “Every time a woman asserts her right to dress the way she wants without being blamed for getting attacked, someone will say – “Feminism isn’t about going half naked”. But you know what? It is. The very fact that people are trying to tell women what is “decent” and what isn’t, what is “acceptable” and what isn’t, means that this matters. Because how a woman dresses should be up to her, and up to her alone.

Kind of ironic isn’t it? Substitute the word man for woman and him for her and you will see what I mean.

“O you fool!” I hear some of you shouting at your monitors “Can’t you see that this is different precisely BECAUSE what he chose to wear objectifies women with its comic-book inspired cleavage!” You make a good point and so I must apologize. I am sorry … but I don’t see why this is any different from so much of what feminists do themselves.

And I’m not just talking about crazy fringe feminists like Femen here. (Where is the internet outrage for what they did with crucifixes in St. Peter’s Square in front of men women and children?) There is the whole Slut Walk movement, and the Free the Nipple campaign which are seeking equality through nudity and the right to objectify oneself without giving anyone else the right to do so in return. There is the feminist praise of Kim Kardashian for being empowered enough to break the internet with her nudity. And there is the likes of Kiera Knightly who protests the evils of Photoshop by posing naked … because feminism. The whole spectrum of crazy inconsistencies is nicely summed up in this feminist cartoon (caution, it contains non-objectifying cartoon cleavage!)

It seems to me this is a case of losing your shirt, but wanting to keep it too. You will have to forgive me for not being able to follow the logic of the selectively schizophrenic syphon through which certain things are empowering and certain other things derogatory. Is it only OK for women to objectify themselves because they don’t really mean it? Perhaps I’m missing the irony. Is it bad that a female friend made this monstrosity of men’s wear for him? Is it wrong because a man actually appreciates the female form? Would it be acceptable if he was a gay man wearing the shirt to make a point? Do feminists themselves even know how to answer such questions, or would they just be outraged that I asked them?

Before things shame-spiral out of control let me say that I think men and women should all dress with much more modesty and respect for not only themselves, but all those around them. Your God-given assets are nothing to be embarrassed about, but they are not to be flaunted around just anyone, and certainly not for public viewing. They are for you and your spouse. Period. Clothes and behaviours shouldn’t objectify any group (including the one doing the displaying).

That being said, there is a time and a place for gaudy shirts, and a press conference is not it. But it hardly seems justifiable that a movement so intensely connected with flashing its bits in public should be so outraged when someone publicly appreciates that same female form … in a shirt that is more restrained in its depiction of that female form than many of the lauded protestors themselves. Nor is the irony lost on me, that they are publicly shaming someone for his choice of clothing and completely disregarding his worth and accomplishments as a human being.

“which is why I suffer as I do. But I am not ashamed, for I know whom I have believed, and I am convinced that he is able to guard until that Day what has been entrusted to me. Follow the pattern of the sound words that you have heard from me, in the faith and love that are in Christ Jesus. By the Holy Spirit who dwells within us, guard the good deposit entrusted to you.”  [2 Timothy 1:12-14]

This month brings with it the annual day of remembrance. Poppies and solemn services, Reverie and Last Post. These will all be a little more poignant this year for us Canadians. In the past couple of weeks we have been shocked and saddened by the death of not one but two members of our armed forces, Warrant Officer Patrice Vincent and Cpl. Nathan Cirillo, right here on our own Canadian soil. Murdered simply because of their uniform. One can’t help but also think of the three  fallen RCMP officers from Moncton in this regard either.

Without making light of the pain their families and communities now bear, it is a powerful reminder that freedom always comes at a cost. A cost every soldier proudly says they are willing to pay when they take up the uniform. Make no mistake, this is not just about conflicting ideologies. At least, not because of any nationalistic or social/political/religious identity. (Although it is very obvious that  NOT all such identities are morally equivalent or “good” by any stretch of any definition!) It is a question of Good and Evil. The sanctity of life and the disregard for life. Evil is real, and evil never rests. It will not stop until all is enslaved once again. Eternal vigilance is not just the stuff of rhetoric and political speeches. It is the price that must sometimes be paid in blood. Thank God we have those brave souls who are willing to pay it!

But before our country remembers it’s fallen soldiers, the church has already done the same. All Saints day (November 1)  is our reminder (in part) of the lives lived and died under Christ as the price of that eternal freedom of God’s Kingdom.

Many of these soldiers of the cross never once picked up a gun, or marched off into battle (though many did), but all sacrificed, in their own way, for the sake of country, neighbour, family, and God. When they took up the uniform of the faith, Christ’s robes of righteousness, each confessed their willingness to pay the cost. All were willing to meet evil head on, in their communities, their homes, the lives of their friends and neighbours. Many fought for those they had never met, and likely never would this side of eternity – sending money and missionaries, providing aid and prayers for any and all affected by the high cost of evil in this world.

And facing that evil, they paid for it. They paid from their own comfort, their livelihoods, their reputations, the support of their friends and family. Some even paid with their lives. And more and more pay every year. It is open season on Christians in vast parts of our world … but just you watch … that won’t stop them from standing up and paying the price to love their friends and family, communities and countries, strangers and enemies. They know it is the cost of freedom.

Canadians have been entrusted with a freedom and openness that makes life for her citizens the envy of much of the world. It is the good deposit we are called to defend. Christians have an even greater deposit entrusted to them … the very Gospel of God … the Good News of free salvation in Christ for anyone and everyone regardless of nationality. So remember the sacrifices that allow you to be here today. Remember and stand guard for those who will come tomorrow. To live in service to freedom and to die in service to that freedom are always worthwhile. Just ask the families of our faithful men and women of the Canadian Armed Forces, RCMP, and all first responders (Firefighters, Police, and EMT’s) who gladly do the same for us everyday. Just ask your Christian brothers and sisters around the world. 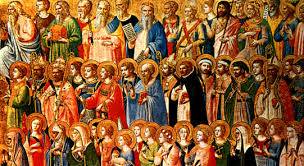 Don't Take My Word for It

A Little Bit About Me …